A Meta-analysis of Animal Survival Following Translocation: Comparisons Between Conflict and Conservation Efforts

Is Livestock an Important Food Resource for Coyotes and Wolves in Central Eastern Alberta Counties with Predator Control Bounties?

Although bounties are known to be an ineffective management practice to address human-carnivore conflicts, they are maintained by some Alberta rural municipalities (counties) to ostensibly reduce livestock predation by coyotes (Canis latrans) and wolves (Canis lupus).

Use of Non-invasive Genetics to Generate Core-Area Population Estimates of a Threatened Predator in the Superior National Forest, USA

Canada lynx (Lynx canadensis) are found in boreal forests of Canada and Alaska and range southward into the contiguous United States.

The implementation of mammal predator killing programs is highly controversial and deserves discussion within the scientific community.

We measured seasonal changes in body composition, including fatness and fill in the digestive tract, in 79 muskox (Ovibos moschatus) calves shot by Inuit hunters in April, May, July, August, September and November, 1989-1993, on Victoria Island in northern Canada.

For best PDF viewer experience, please refer to the image below and expand to Fullscreen mode. 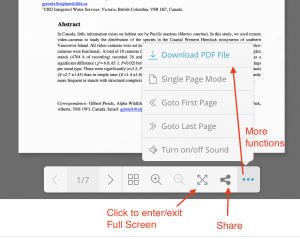 Want to publish your work?

We are inviting you to submit your contributions on Canadian Wildlife Distribution.